Today, I did BTO Atlas square NZ42G in Norton. A good start at Tesco car park with 11 species recorded - Pied Wagtail, Common Gull, Black-headed Gull, Herring Gull, Long-tailed Tit, Chaffinch, Carrion, Blackbird Rook, Robin & Great Tit. Then onto to Basselton Lane where an old hedgerow near the school gives us the first opportunity to record House Sparrow and Dunnock. Then onto to Norton in particular Station Road which leads down to the railway line and then to the fields.

The recreational sports ground holds plenty of birds eventhough all the sports fields were in use with a good number of supporters. Robins were singing loud from the Beach hedge and the Common Gulls still found a spot to roost in area of the fields. The railway line once again proved to be a wildlife corridor with birds flying up / down and across the tracks. We even spotted a Grey Squirrell jumping across the lines.

On to the fields, past Calf Fallow Farm and a male Sparrowhawk was on patrol from gardens. A small section of grass nearby held 18 Redwings, 16 Blackbirds, 1 Song Thrush and a Great Tit. The hedges, scrubs and trees were full of birds, so we finished our 2 hour count with 27 species.

This morning I did a BTO Atlas square walk (NZ42L) at Norton. It was cold, but with blue skies overhead we started at St Mary's Church in Norton. This is a wonderful churchyard for birds and today was no exception as a Goldcrest dropped into a Holly tree about 5 foot away from where I was standing. The Rooks were sitting high up in the tops of the trees whilst the smaller birds searched nearer the ground. Blue Tit, Great Tit, Long-tailed Tit, Wren, Robin, Blackbird and Redwing were all present in good numbers.

After leaving Norton Church we went to Mill Lane and walked to Billingham bottoms. Two more Goldcrests were added to the list and alongside the beck we found Bullfinch and Siskin feeding in the hedgerow.

The last stop of the square included the railway line near Crooksbarn Estate, Norton. As we approached the railway crossing I spotted some Brambling and a male Blackcap which were wonderful to see. I estimated 10 Brambling in the flock feeding in the scrubs alongside the line and we finshed the count with 30 species.

Today, I decided to do my Big Garden Birdwatch count for our garden. It had been a cold night and when I woke it was still -2.5C outside. I watched from the window from 08:20 - 09:20 and recorded the following birds:

This was one of best BGBW since the count began. Usually the birds disappear from the garden for this weekend.
Posted by Julie at 22:54 No comments:

Yesterday, Open Country from Harrogate visited the Teesmouth Field Centre. We went to the Hartlepool Power Station hide overlooking Seal Sands and had a great couple of hours watching the birds and seals. A Black-necked Grebe in winter plumage was feeding about 40 feet from the hide and then a Peregrine put on an aerobatic display that the Red Arrows would be proud to undertake. As the tide turned a flock of 60 Knot flew past and out of Seal Sands.

At the end of the day, I took the group to Cowpen Marsh car park to look for a Barn Owl. After 10 minutes, the Barn Owl started hunting in amongst the cows a wonderful sight for the group to see.

Today, was the first Seal Watch of the year at the Teesmouth Field Centre. Twelve visitors came along to enjoy 16 seals and a good variety of birds.

I managed to increase my year list to 63 with
Pink-footed Goose
Shelduck
Red-breasted Merganser
Black-necked Grebe
Oystercatcher
Barn Owl
Posted by Julie at 20:32 No comments:

After an overnight low of -2.5C, the frost still clung to the fallen leaves at lunchtime. 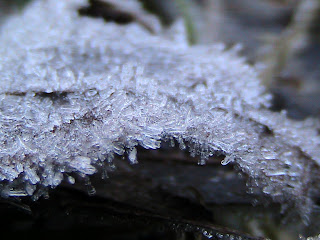 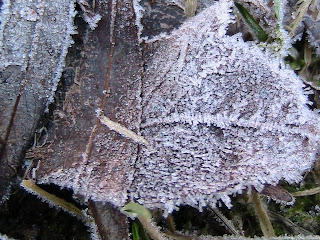 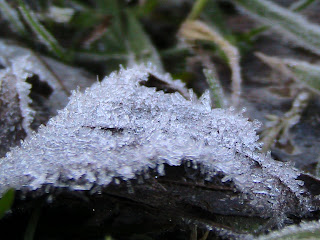 10 birds were feeding on the grass near work at lunchtime.
Posted by Julie at 19:17 No comments: 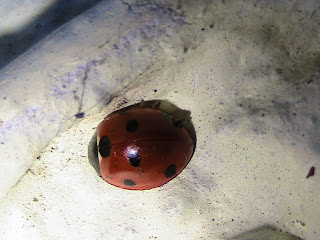 I found my first ladybird of the year on Saturday, asleep on the wall of the house.
Posted by Julie at 22:28 No comments: 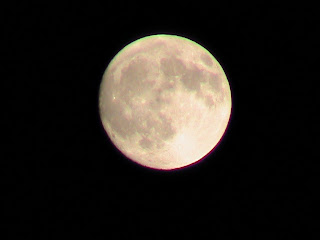 I had a walk during my lunchtime at Belasis Hall Technology Park and managed to see 10 Goosanders on the lakes. 7 females and 3 males were swimming together in the centre of the pool. It was good to hear the birds, such as Great Tit and Robin singing as I walked to the towards the pools.

Feral pigeon was a new visitor to the garden since we joined Garden Birdwatch.

This morning I did a BTO Tetrad survey for NZ42E. Twenty-three species were seen which also added Song Thrush, Bullfinch and Stock Dove to my year list.

In the afternoon, I went to Cowpen Bewley Woodland Park to see a drake Ring-necked Duck and whilst we were watching a Sparrowhawk flew over and flushed the gulls trying to catch a meal. The visit to Cowpen Bewley also added Pochard, Gadwall, Sparrowhawk, Tree Sparrow and Yellowhammer to my year list.

Good start to the day, with 13 Waxwings in Billingham and other birds such as Redwing, Long-tailed Tit, Pied Wagtail and Curlew seen whilst searching for the Waxwings. A lunch-time stop at the Teesmouth Field Centre to top up the bird feeder yielded a Stonechat and a Great Black-backed Gull. Then whilst driving to North Gare I saw a Pheasant, Rook, Grey Heron and Magpie. At the end of the day, I stopped at Dorman's Pool to try for Short-eared Owl, but no luck although I did see a Little Egret flying off to roost.

The larger pools are still frozen, covered with a thick layer of ice so the waders are feeding around small temporary pools left behind by the melting snow.
Posted by Julie at 19:57 No comments:

The 1st January is the start of a new bird year list and after watching our garden birds during breakfast. I went to RSPB Saltholme and wasn't disappointed. Two Long-eared Owls were roosting in the scrub and two Water Rails were feeding close to the Wildlife Watchpoint. 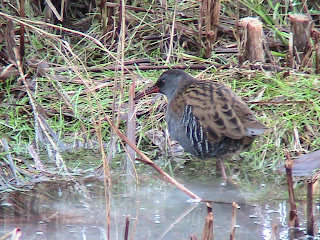 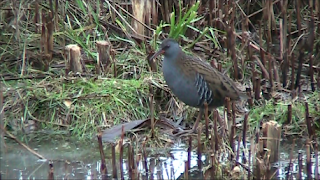 At the end of the day, my year list is 32 species. Many of the pools are still frozen, so the waders were hiding.
Posted by Julie at 19:52 No comments:
Newer Posts Older Posts Home
Subscribe to: Posts (Atom)